Archibald Clark spat his coffee over the computer screen.

His long-suffering wife Marigold went to the kitchen for a dishcloth to clean up the mess.  “It was never a good idea for you to read the newspaper at the breakfast table when it was a paper.  It’s an even worse idea now that it’s on the net,” she said.

Archibald pointed to the headline on the screen. “Prime Minister’s Secret: Exclusive Photos.”  There were pictures of him, obviously taken surreptitiously, having dinner with Angela, shopping with Angela, being greeted by Angela at her front door.

“So come out and tell the truth, Arch,” Marigold said matter-of-factly.  “Angela is your daughter from a previous relationship.  You spend time with her because you’re her Dad and you care about her.”

“If that much comes out, how much before everything else comes out?”

“How bad would it be if it did come out?”

“How bad?” Archibald buried his head in his hands.

“So, you’re intersex.  You live as a man now, but in the past you gave birth to a beautiful, intelligent, caring, daughter.  You have the best of both worlds,” Marigold, as usual, missed the whole point.

“Intersex?  You know the voters don’t know what that is.  They think it’s some trendy left-wing social movement.  The media will end up using the H-word.” He was pale, shaking.

“Oh, for goodness’ sake,” Marigold replied. She took a sip of her own coffee before she added. “Hermaphrodite is just a word.  It’s an ugly word, sure, but you’re the Prime Minister. No-one is going to chain you up and put you on display in a freak show.  The world moves on.  Society changes and people learn.”

“But I’m not going to be Prime Minister much longer am I? I’m in a catch 22. Either everyone believes I’m having an affair with an 20 year old, or they think I’m some kind of freak.  Either way, the Party is going to decide I’m electoral poison.  Murchessin’s been agitating for weeks.  This will be all it takes for him to challenge in the Party Room. Goldie, I’m totally screwed.” 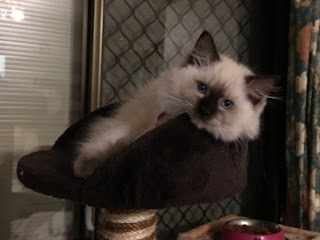 Collar bell jingles, soft paws pat her ball,
the kitten is playing her way down the hall.

She wiggles her bum as she targets a pounce,
knocks things off the shelf to see if they bounce.

She leaps into a lap for a moment or two,
but can’t stay there when there’s so much to do.

The world is all new, there’s so much to explore,
for this little kitten there’s adventures galore!

She scampers and climbs, she runs then she stays,
Life is a game, won’t you please come and play?

Then all of a sudden, she comes to a stop,
She gives a small yawn, and she falls with a flop.

And then with a deep self-satisfied purr
she forms a tight ball of warm snuggly fur.

She twitches a whisker and breathes long and deep
the sweet gentle snore of an innocent sleep.

This poem now appears in "Poetic Pets" available at www.lulu.com/spotlight/IrisCarden. 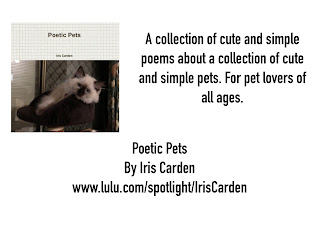