The party was meant to start at 4.  All of the kids in Amanda’s class had been invited.

It was 4.30.  Still no kids.  Just Amanda, in her carefully-decorated back yard.

Mum sat down beside Amanda.  “It’s those bullies, isn’t it?” Mum asked. “Because you stood up to them?”

“Yes,” Amanda answered.  “They told the other kids not to come.  I thought some would ignore them.”

“Well, I don’t believe in letting bullies win. Do you?” Mum said.

“No. But what are we going to do?” Amanda said sadly.

“We’re going to have the most amazing birthday party any seven-year-old girl ever had.” Mum said.  “We’re going to invite some other guests instead.”

“What other guests? My friends aren’t brave enough to come.”

“When I was a little girl, I had bullies in my class, too,” Mum said.  “I was sad and lonely, but then I met some very special friends, who helped me make everything better. I’m going to call those friends now.”

Amanda thought that her Mum’s adult friends would not be very much fun, but they’d be better than no-one at her party, so she agreed.

Instead of calling her friends on the telephone, Mum told Amanda to collect all the small stones she could find around the yard. While Amanda was doing that, Mum went inside the house and came back with a small box, just a little bigger than a matchbox.  It was made of metal, and Amanda thought it might be silver.

“Right,” said Mum, “we need to make a circle with the stones.

They made the circle.  Then Mum opened the box, which was full of a silver powder.  Mum took a pinch of the powder and put it into the middle of the circle. She said, “My dear friends, I’m sorry I haven’t seen you for so long.  Right now, I need your help again.  My little girl is having a birthday party and none of the guests have come.  Would you please come and celebrate with her?”

Amanda had never seen her Mum act like this before, and was going to explain that the stones weren’t her friends, when something strange happened.

Mum said, “It’s so good to see you all again.  This is my daughter Amanda.”

The fairy in pink said, “It’s good to see you again, too, Mary.  I’ve missed you. You’ve got very big since last time. I guess that’s what humans do.  Hello Amanda, my name’s Rose. These are my sisters. The one in yellow is Daisy, the one in green is Ivy, and the one in blue is Iris.  We’ve come to wish you a happy birthday. Are you going to open your presents?”

Amanda was about to say she didn’t have any presents, when she looked over at the table and saw four wrapped presents. One was wrapped in pink paper, one in yellow, one in green and one in blue.

Opening the pink present, she found a pair of snowy white fairy wings.

“They really work,” Rose said.  “They don’t fly as well as ours do, but they fly much better than any human can.”  The other fairies giggled.  “Put them on.  Try them.”

Amanda did put them on.  She found she could flap the wings just by thinking about it. At first she flew just a little bit off the ground, but after she felt more confident, she flew around the yard and back.

“This is just amazing! Thank you so much, Rose,” Amanda said.  The fairies all giggled.

“Open mine next, please!” said Daisy.

Amanda opened the yellow parcel.  Inside was a small gold box, the same size as her mother’s silver box.

“It’s fairy dust!” Daisy squealed happily.  “So you can talk to us or invite us to visit you any time. You just make a circle of stones, put a pinch of dust in it and you can talk to us.  And we can come to you, wherever you are.”

“Thank you.  Wow!  I didn’t even know fairies were real before, and now I can talk to you any time! This is the best birthday ever!” Amanda said.

Amanda tore the paper off the green parcel.  Inside was a snowy white dress, in the same style as the ones the fairies wore.

“I’ve got to put this on!” Amanda said.  She ran inside to put on her dress and was back in minutes.

“Now, I look like one of you!” She said excitedly, as she came back.

“Wait a moment,” Mum said.  I’ll be right back.  Mum went into the house, and came back a couple of moments later wearing a silver fairy dress and wings.  “The dress changes size,” she said.  “Ivy gave me mine when I was your age.”

“You knew fairies all this time and never told me?” Amanda asked.

“It’s a secret,” Mum answered.  “If you’re lucky enough to be friends with fairies, you don’t tell anyone . If people knew they were real, some would try to catch them to use their magic for bad things.”

Amanda opened the last present.  Inside was a golden stick.  Could it be a magic wand?

Amanda turned back to her mother and the fairies.  Each of them was now holding a gold stick.

“It’s real.” Said Iris.  “It’s like the wings. It won’t work as well as ours, but you can still use it to do things other humans can’t.”

For the rest of the afternoon, they played party games, ate party food, and Amanda learned how to use her wings and wand.

By the time the party was over, she could fly confidently as high as the roof, or land on a tall tree branch.  She could use her wand to move things from place to place, to make seeds grow and flowers bloom. She could make the flowers on the orange tree turn into ripe juicy oranges in moments.

The next day, at school, whenever any of her school friends told her they were sorry they missed her party, she said she was sorry too, because they’d missed the best birthday party ever.

Review of "A Dream Comes True" by Shirley Byrne 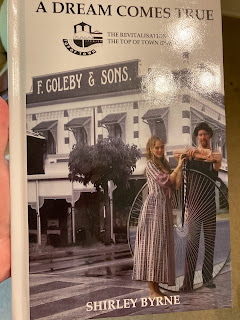 History books are usually done by researchers who search through old documents to understand and interpret events of the past.
Shirley Byrne's A Dream Comes True: The Revitalisation of the Top of Town Ipswich does that, but in combination with Shirley's own recollections of the events.
Shirley was very active in the movement to restore an historic section of Ipswich, rather than have it torn down for new development.  (When I say very active, I wondered as I read the book how she found time to eat and sleep.) This rescue effort, the restoration and revitalisation of Top of Town, was a major project which took the entire 1990s.
Reading the book is as if Shirley is in the room, just telling her story and the Top of Town story, but with photos and copies of the plans and such like to show as she tells it.
For her, and a dedicated group of business people, city council members and other residents, protecting the history of this Queensland city was extremely important.
As a newcomer to Ipswich, I enjoy looking at the many beautiful historic buildings here, but until Shirley's book, I had no idea how much work had gone into protecting and preserving those buildings.
In addition to the Top of Town story, Shirley has included a brief summary of Ipswich history right from the first European settlement.
Shirley won the Ipswich Libraries' Vera Cribb Bursary (local history prize) to help fund the production of this book, which should be of interest to anyone interested in Ipswich history.
A Dream Comes Tre: The Revitalisation of the Top of Town Ipswich, is available in hardcover from Hot Mustard Creations (link).